The following diagram depicts a basic four-node YugabyteDB universe, with one table that has 16 tablets and a replication factor of 3: 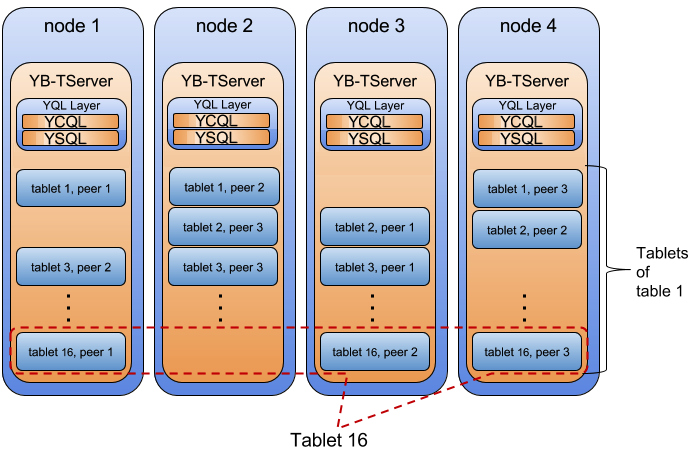 The tablet-peers corresponding to each tablet hosted on different YB-TServers form a Raft group and replicate data between each other. The system shown in the preceding diagram includes sixteen independent Raft groups. For more information, see Replication layer.

Within each YB-TServer, cross-tablet intelligence is employed to maximize resource efficiency. There are multiple ways the YB-TServer coordinates operations across tablets it hosts.

The block cache is shared across different tablets in a given YB-TServer, leading to highly-efficient memory utilization in cases when one tablet is read more often than others. For example, if one table has a read-heavy usage pattern compared to others, the block cache would automatically favor blocks of this table, as the block cache is global across all tablet peers.

The default policy ensures that doing a compaction is worthwhile. The algorithm tries to make sure that the files being compacted are not too disparate in terms of size. For example, it does not make sense to compact a 100GB file with a 1GB file to produce a 101GB file, because it would require a lot of unnecessary I/O for little gain.

Compactions are prioritized into large and small compactions with some prioritization to keep the system functional even in extreme I/O patterns.

In addition to throttling controls for compactions, YugabyteDB does a variety of internal optimizations to minimize impact of compactions on foreground latencies. For example, a prioritized queue to give priority to small compactions over large compactions to make sure the number of SSTable files for any tablet stays as low as possible.

YugabyteDB allows compactions to be externally triggered on a table using the compact_table command in the yb-admin utility. This is useful when new data is no longer coming into the system for a table and you might want to reclaim disk space due to overwrites or deletes that have already happened, or due to TTL expiry.

Server-global memstore limit tracks and enforces a global size across the memstores for different tablets. This is useful when there is a skew in the write rate across tablets. For example, if there are tablets belonging to multiple tables in a single YB-TServer and one of the tables gets a lot more writes than the other tables, the write-heavy table is allowed to grow much larger than it could if there was a per-tablet memory limit. This allows good write efficiency.

Auto-sizing of block cache and memstore

The block cache and memstores represent some of the larger memory-consuming components. Since these are global across all the tablet-peers, this makes memory management and sizing of these components across a variety of workloads easy. Based on the RAM available on the system, the YB-TServer automatically gives a certain percentage of the total available memory to the block cache, and another percentage to memstores.

On multi-SSD machines, the data (SSTable) and WAL (Raft write-ahead log) for various tablets of tables are evenly distributed across the attached disks on a per-table basis. This load distribution (also known as striping), ensures that each disk handles an even amount of load for each table.