The user-issued write request first hits the YQL query layer on a port with the appropriate API, which is either YSQL or YCQL. This user request is translated by the YQL layer into an internal key. Recall from the sharding section that each key is owned by exactly one tablet. This tablet as well as the YB-TServers hosting it can easily be determined by making an RPC call to the YB-Master. The YQL layer makes this RPC call to determine the tablet/YB-TServer owning the key and caches the result for future use.

YugabyteDB has a smart client that can cache the location of the tablet directly and can therefore save the extra network hop. This allows it to send the request directly to the YQL layer of the appropriate YB-TServer which hosts the tablet leader. If the YQL layer finds that the tablet leader is hosted on the local node, the RPC call becomes a local function call and saves the time needed to serialize and deserialize the request and send it over the network.

The YQL layer then issues the write to the YB-TServer that hosts the tablet leader. The write is handled by the leader of the Raft group of the tablet owning the key.

The leader of the tablet's Raft group performs the following sequence:

The follower tablets receive the data replicated using Raft and apply it into their local DocDB once it is known to have been committed. The leader piggybacks the advancement of the commit point in subsequent RPC requests.

Step 4. Sending response to the client

As an example, let us assume the user wants to insert into a table T1 that had a key column K and a value column V the values (k, v). The write flow is depicted below. 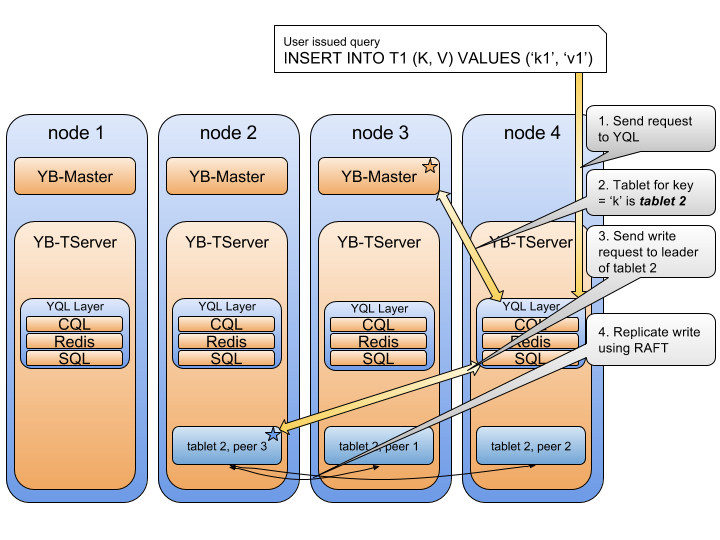 Note that the above scenario has been greatly simplified by assuming that the user application sends the write query to a random YugabyteDB server, which then routes the request appropriately. In practice, the use of the YugabyteDB smart client is recommended for removing the extra network hop.