Back up universe YSQL data

You can use YugabyteDB Anywhere to back up your YugabyteDB universe YSQL data.

To view, restore, or delete existing backups for your universe, navigate to that universe and select Backups, as per the following illustration: 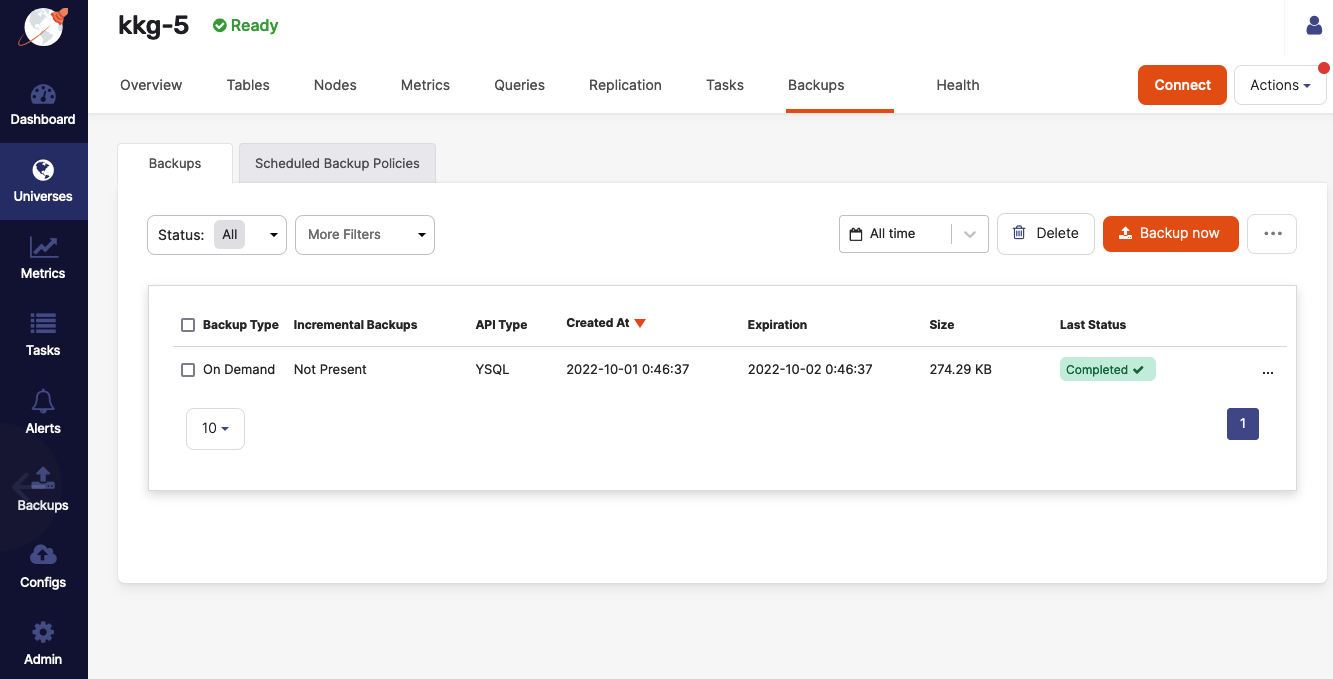 By default, the list displays all the backups generated for the universe regardless of the time period. You can configure the list to only display the backups created during a specific time period, such as last year, last month, and so on. In addition, you can specify a custom time period.

The Backups page allows you to create new backups that start immediately, as follows:

If the universe has encryption at rest enabled, data files are backed up as-is (encrypted) to reduce the computation cost of a backup and to keep the files encrypted. A universe key metadata file, containing key references, is also backed up. To allow YugabyteDB Anywhere to back up your data with the user authentication enabled, follow the instructions provided in Edit configuration flags to add the ysql_enable_auth=true and ysql_hba_conf_csv="local all all trust" YB-TServer flags.

For information on how to schedule backups for a later time or as a recurring task, see Schedule universe YSQL data backups.

To view detailed information about an existing backup, click on it to open Backup Details. In addition to actions such as deleting and restoring the backup, as well as restoring and copying the database location, you can use Backup Details to add an incremental backup for universes that had the YB Controller automatically installed during their creation. The same universes allow you to configure their throttle parameters by clicking ... > Configure Throttle Parameters, as per the following illustration:

You define throttle parameters to enhance your universe's backups and restore performance using the Configure Throttle Parameters dialog shown in the following illustration: 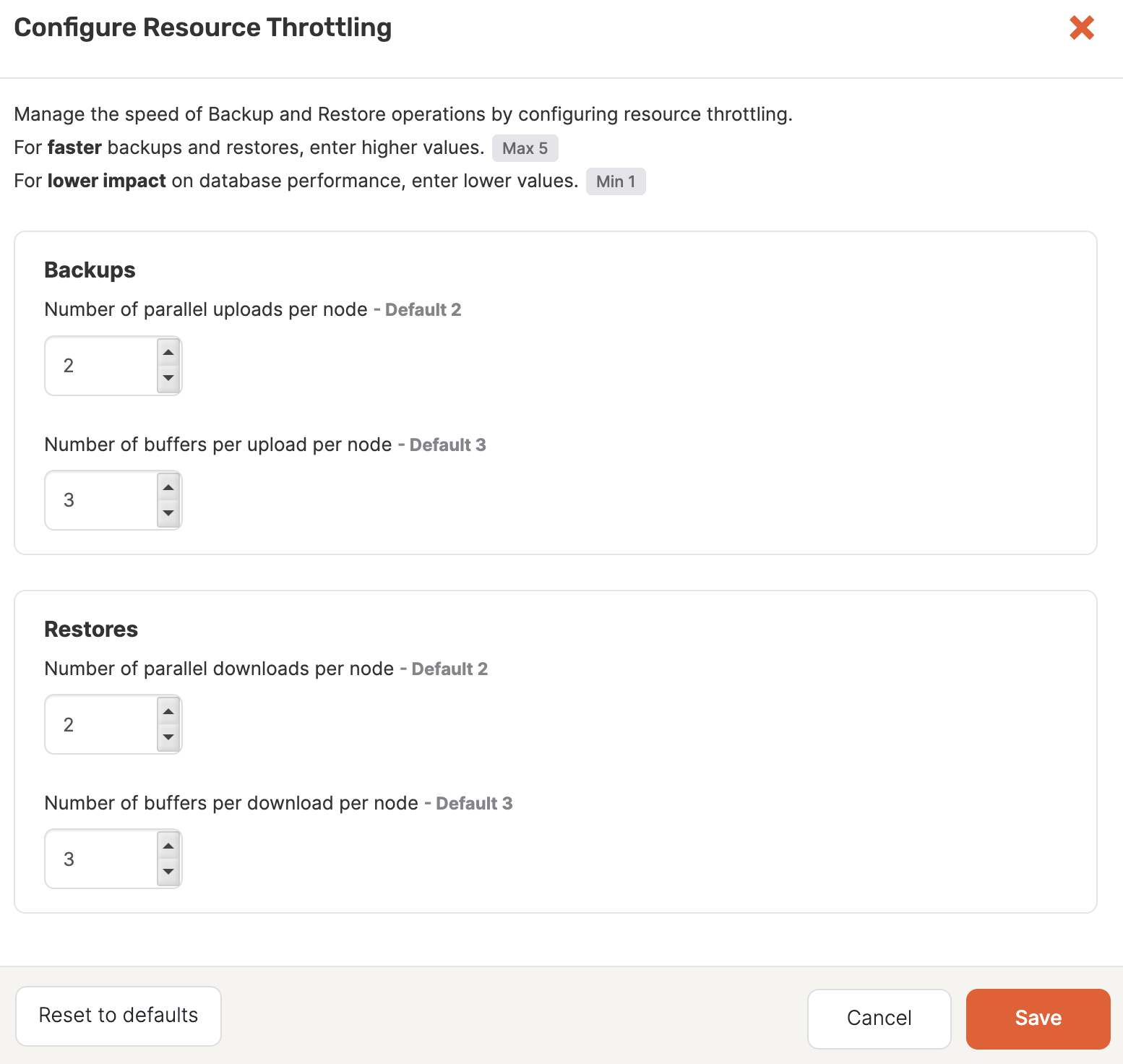 To access a list of all backups from all universes, including the deleted universes, navigate to Backups on the YugabyteDB Anywhere left-side menu, as per the following illustration: 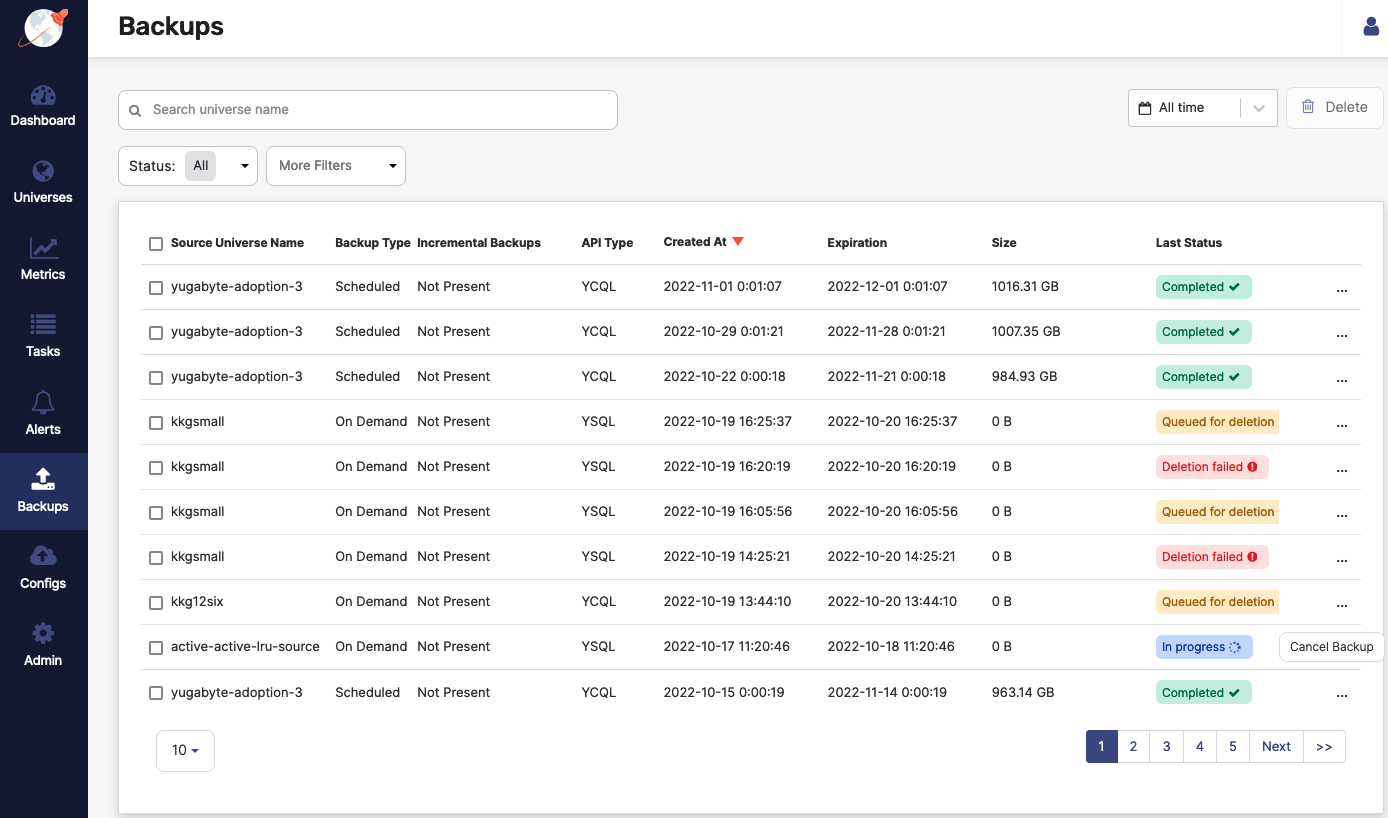 Incremental backups are taken on top of a complete backup. To reduce the length of time spent on each backup, only SST files that are new to YugabyteDB and not present in the previous backups are incrementally backed up. For example, in most cases, for incremental backups occurring every hour, the 1-hour delta would be significantly smaller compared to the complete backup. The restore happens until the point of the defined increment.

A successful incremental backup appears in the list of backups.

You can delete only the full backup chain which includes a complete backup and its incremental backups. You cannot delete a subset of successful incremental bakups.

A failed incremental backup, which you can delete, is reported similarly to any other failed backup operations.