A YugabyteDB cluster consists of three or more nodes that communicate with each other and across which data is distributed. You can place the nodes of a YugabyteDB cluster across different zones in a single region, and across regions. The topology you choose depends on your requirements for latency, availability, and geo-distribution:

YugabyteDB Managed offers a number of deployment and replication options in geo-distributed environments to achieve resilience, performance, and compliance objectives.

In a single-region multi-zone cluster, the nodes of the YugabyteDB cluster are placed across different availability zones in a single region. 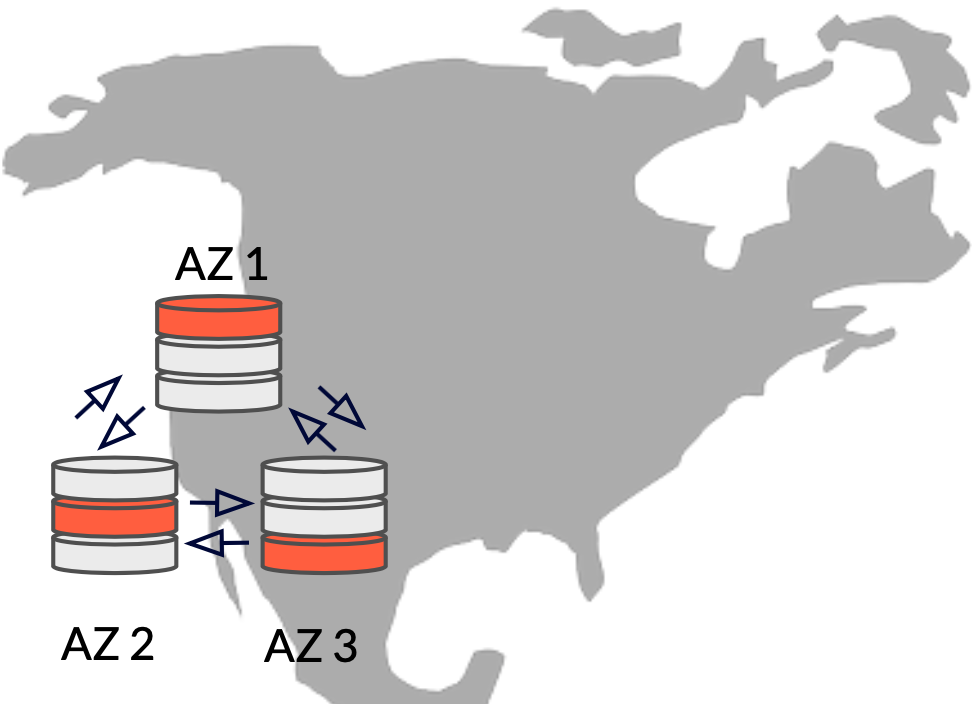 Resilience: Cloud providers like AWS and Google Cloud design zones to minimize the risk of correlated failures caused by physical infrastructure outages like power, cooling, or networking. In other words, single failure events usually affect only a single zone. By deploying nodes across zones in a region, you get resilience to a zone failure as well as high availability.

Consistency: YugabyteDB automatically shards the tables of the database, places the data across the nodes, and replicates all writes synchronously. The cluster ensures strong consistency of all I/O and distributed transactions.

Latency: Because the zones are close to each other, you get low read and write latencies for clients located in the same region as the cluster, typically 1 – 10ms latency for basic row access.

Availability Zone Level, with a minimum of 3 nodes across 3 availability zones in a single region.

In a cluster that is replicated across regions, the nodes of the cluster are deployed in different regions rather than in different availability zones of the same region. 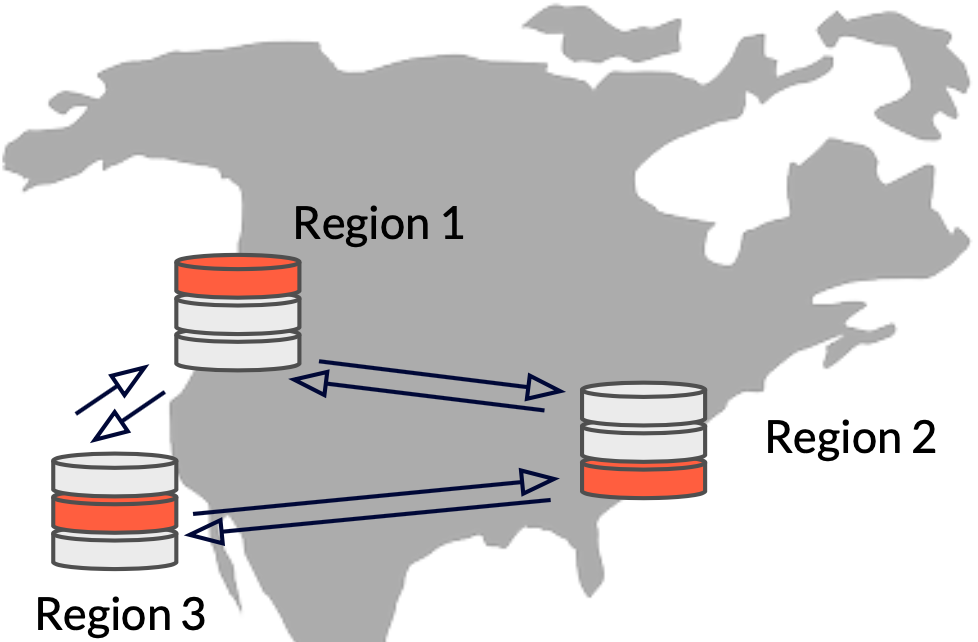 Resilience: Putting cluster nodes in different regions provides a higher degree of failure independence. In the event of a region failure, the database cluster continues to serve data requests from the remaining regions. YugabyteDB automatically performs a failover to the nodes in the other two regions, and the tablets being failed over are evenly distributed across the two remaining regions.

Consistency: All writes are synchronously replicated. Transactions are globally consistent.

Latency: Latency in a multi-region cluster depends on the distance/network packet transfer times between the nodes of the cluster and between the cluster and the client. As a mitigation, YugabyteDB offers tunable global reads that allow read requests to trade off some consistency for lower read latency. By default, read requests in a YugabyteDB cluster are handled by the leader of the Raft group associated with the target tablet by default to ensure strong consistency. In situations where you are willing to sacrifice some consistency in favor of lower latency, you can choose to read from a tablet follower that is closer to the client rather than from the leader. YugabyteDB also allows you to specify the maximum staleness of data when reading from tablet followers.

Write latencies in this deployment mode can be high. This is because the tablet leader replicates write operations across a majority of tablet peers before sending a response to the client. All writes involve cross-zone communication between tablet peers.

Region Level, with a minimum of 3 nodes across 3 regions.

To deploy a multi-region replicated cluster, refer to Replicate across regions.

Applications that need to keep user data in a particular geographic region to comply with data sovereignty regulations can use row-level geo-partitioning in YugabyteDB. This feature allows fine-grained control over pinning rows in a user table to specific geographic locations.

Here's how it works:

With this deployment mode, the cluster automatically keeps specific rows and all the table shards (known as tablets) in the specified region. In addition to complying with data sovereignty requirements, you also get low-latency access to data from users in the region while maintaining transactional consistency semantics.

In YugabyteDB Managed, a partition-by-region cluster consists initially of a primary region where all tables that aren't geo-partitioned (that is, don't reside in a tablespace) reside, and any number of additional regions where you can store partitioned data, whether it's to reduce latencies or comply with data sovereignty requirements. Tablespaces are automatically placed in all the regions. 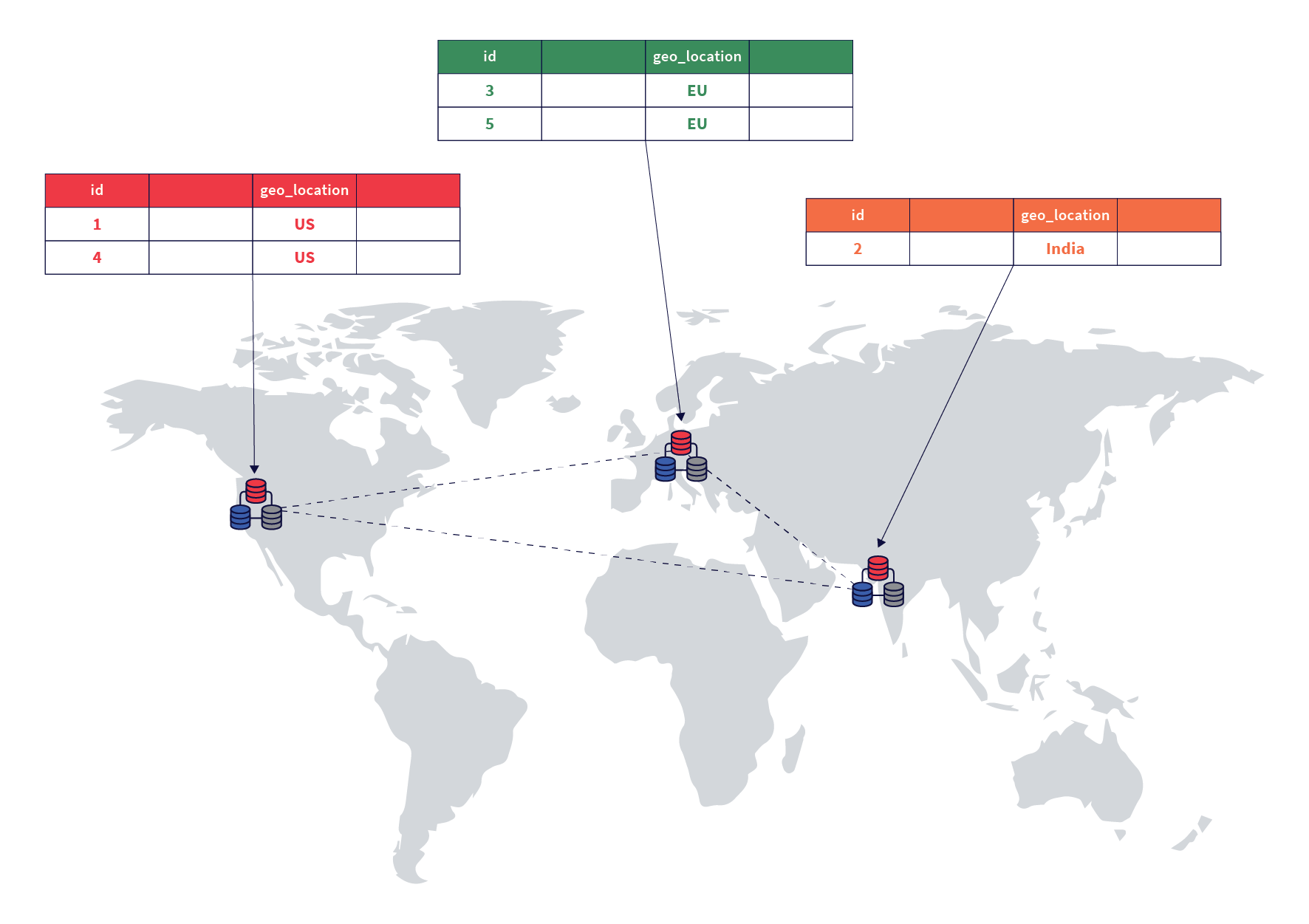 Resilience: Clusters with geo-partitioned tables are resilient to zone-level failures when the nodes in each region are deployed in different zones of the region.

Consistency: Because this deployment model has a single cluster that is spread out across multiple geographies, all writes are synchronously replicated to nodes in different zones of the same region, thus maintaining strong consistency.

Latency: Because all the shard replicas are pinned to zones in a single region, read and write overhead is minimal and latency is low. To insert rows or make updates to rows pinned to a particular region, the cluster needs to touch only shard replicas in the same region.

To deploy a partition-by-region cluster, refer to Partition by region. 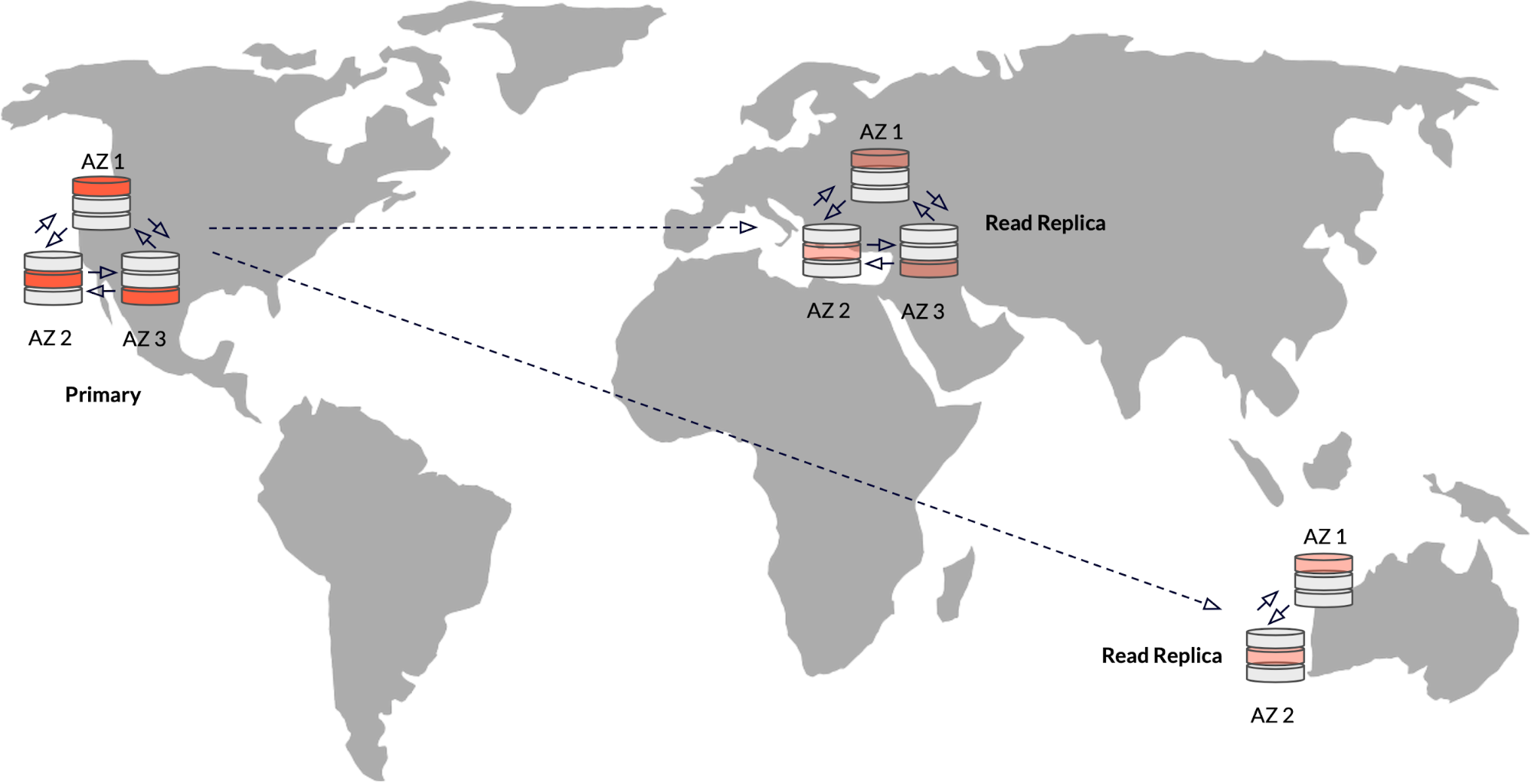 Resilience: If you deploy the nodes of the primary cluster across zones or regions, you get zone- or region-level resilience. Read replicas don't participate in the Raft consistency protocol and therefore don't affect resilience.

Consistency: The data in the replica clusters is timeline consistent, which is better than eventual consistency.

You can add replicas to an existing primary cluster as needed. Refer to Read replicas.