Before trying the code in this section, make sure that you have created the "edges" table (see cr-edges.sql) and installed all the code shown in the section Common code for traversing all kinds of graph. Make sure that you start by choosing the option that adds a tracing column and a trigger to the "raw_paths" table. (You will later re-create the "raw_paths" table without the tracing code before you do some timing tests.)

Look at this undirected cyclic graph: 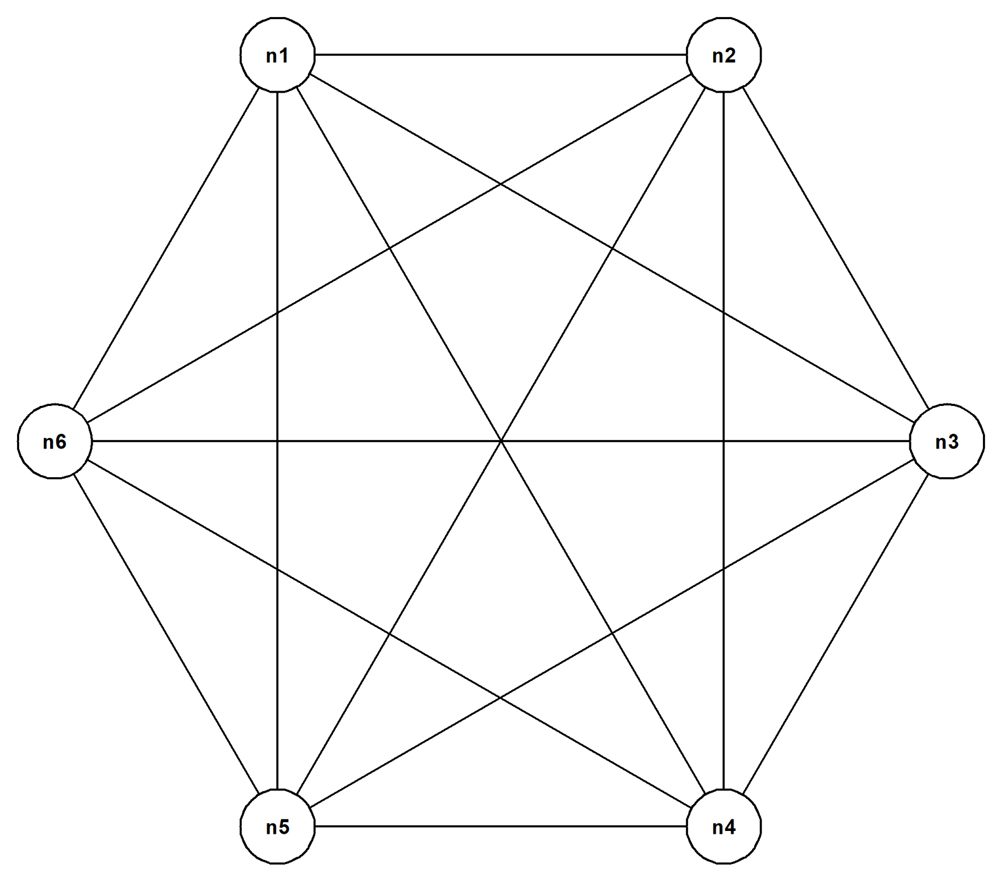 Each of its six nodes has an edge to each of the other five nodes—in other words, it's maximally connected.

A "maximally connected graph" is a connected undirected graph where every node has an edge to every other node. Such a graph is inevitably cyclic.

("Connected" means that there exists a path from every node to every other node in the graph.)

The following code automates the creation of such a maximally connected undirected cyclic graph for the specified number of nodes. First create a helper procedure:

Now invoke it to populate the "edges" table and inspect the outcome:

The whitespace was added by hand to group the results into the sets of five edges that connect to each of the six nodes.

Recall how the logic of the recursive CTE from cr-find-paths-with-nocycle-check.sql is expressed:

You can see this in action by re-creating the "find_paths()" implementation shown in cr-find-paths-with-pruning.sql and invoking it like this:

This agrees with what the analysis presented above predicts.

The growth rate is astonishing. You can see immediately that there must be a limit to the viability of using a "find_paths()" implementation that doesn't do early path pruning as the size of the maximally connected graph increases. The following thought experiment makes this clear.

Suppose that a clever, highly compressive, representation scheme were invented to store paths with an average space consumption per path of, say, just 10 bytes. And suppose that you invest in a 1 TB external SSD drive for your laptop to hold paths represented using this clever scheme. Your SSD's capacity is 2^40 bytes—about 10^12 bytes. This isn't enough to store the 2.4*10^11 paths that a maximally connected graph with just 15 nodes has.

Consider trying this test again and again with increasing values for :nr_nodes.

Even if you did create a single-node YugabyteDB cluster so that it used your 1 TB SSD for its data files, you doubtless wouldn't have the capacity for the paths for even a 14-node maximally connected graph because the hypothetical dedicated highly compressive path representation scheme isn't in use. This can only mean that the "find_paths()" execution would crash for some run with fewer nodes than 14.

The thought experiment, above, was described to show that the "find_paths()" scheme that uses schema-level tables to implement the intermediate and final results for the recursive CTE algorithm, without pruning, will inevitably reach a limit and crash when the target graph has too many paths. Similar reasoning shows that the ordinary, explicit, use of the recursive CTE will inevitably crash, too, under similar circumstances. There's no point in trying to make more realistic estimates of the various sizes that will jointly conspire to bring eventual failure. Rather, an empirical test better serves the purpose.

Before doing the stress-test experiment, make sure that you have created the "edges" table (see cr-edges.sql) and installed all the code shown in the section Common code for traversing all kinds of graph. But this time, make sure that you start by choosing the option that re-creates the "raw_paths" table without the tracing code before you do some timing tests.)

Note: The stress-test is implemented by a few scripts where all but one call other script(s). In order to run the whole test, you should create a directory on your computer and, when told to, save each script there with the name that's given. The downloadable code zip arranges all of the scripts it includes in a directory tree that implements a useful classification scheme. This means that, in the files from the zip, the arguments of the \i, \ir, and \o metacommands are spelled differently than they are here to include directory names.

A scripting scheme is needed to call the basic test (see the code, above, that starts with the comment "Sketch of stress-test kernel") repeatedly for each value of interest of :nr_nodes and after installing, in turn, each of the three methods. It will also be useful if the stress-test kernel times each invocation of "find_paths()".

The "find_paths()" invocation syntax depends on the present method. A procedure manages this nicely:

The stress-test kernel must spool the output to a file whose name encodes the present number of nodes and method name. A well-known pattern comes to the rescue: use a table function to write the script that turns on spooling and invoke that script. This is the function:

Create a script to do the stress-test kernel

With the two building blocks, the procedure "invoke_find_paths()" and the function "start_spooling_script()", in place, the following script implements the stress-test kernel:

You can manually test a single use of it. First decide on the method. These are the choices:

Decide on the number of nodes, for example 7. And choose the method, for example "pure-with". (Remember to install it.) Then do this:

This will produce the 7-nodes--prune-false.txt spool file. It will look like this:

Of course, the reported elapsed time that you see will doubtless differ from "40 ms".

First, implement a script to invoke each of the three methods for a particular, pre-set, value of :nr_nodes. Get a clean slate for the "paths" tables before each timing test by dropping and re-creating each of them.

Finally, create a script to invoke do-stress-test-for-all-methods.sql for each of the numbers of nodes in the range of interest.

Then invoke do-stress-test-kernel.sql by hand for each of the three methods, setting the number of nodes to 11. You'll see that each of "pure-with" and "prune-false" fails, with error messages that reflect the fact that the implementation can't handle as many as 9,864,100 nodes. But "prune-true" completes without error very quickly.

Finally, invoke do-stress-test-kernel.sql by hand using the "prune-true" method and 100 nodes. You'll see that it completes without error in about the same time as for any smaller number of nodes.

Here are the results:

The elapsed times are in seconds.

The experiment shows that the "prune-false" approach is never preferable to the "pure-with" approach. Each fails beyond a 10-node graph; and the "prune-false" method is slower. This is very much to be expected. It was implemented only for pedagogic purposes and, more importantly, to provide the framework that allows the implementation of early pruning—the "prune-true" approach.

The experiment also shows that the "prune-true" approach is viable and quick even for graphs with unimaginably huge numbers of possible paths.

This leads to two conclusions:

The introduction to the section Using a recursive CTE to compute Bacon Numbers for actors listed in the IMDb mentions this data set: