If a virtual machine or a physical server in a universe reaches its end of life and has unrecoverable hardware or other system issues, such as problems with its operating system, disk, and so on, it is detected and displayed in the YugabyteDB Anywhere UI as an unreachable node, as per the following illustration:

When this happens, new Master leaders are elected for the underlying data shards, but since the universe enters a partially under-replicated state, it would not be able to tolerate additional failures. To remedy the situation, you can eliminate the unreachable node by taking actions in the following sequence:

A node status displayed in the UI is not always entirely indicative of the node's internal state. For example, a node whose status is shown as Unreachable can have various internal states, some of which are recoverable and others are not.

To perform the remove action on the yb-15-aws-ys-n6 node, click its corresponding Actions > Remove Node. This changes the value in the Status column from Unreachable to Removed and prevents access to data from this node.

There are no values in the Master and TServer columns for the yb-15-aws-ys-n6 node. Leader elections also occur for tablets for which this node was the leader tablet server.

The action to remove a node is available from the following internal states of the node:

Taking this action transfers the node to a Removing and then Removed internal state, as follows:

The node removal action results in the instance still being allocated but not involved in any schemas.

A typical universe has an RF of 3 or 5. At the end of the node removal action, the Master quorum is reduced to (RF - 1) number of Masters. To restore the resilience of the Master quorum, you can start a new Master process, as follows: 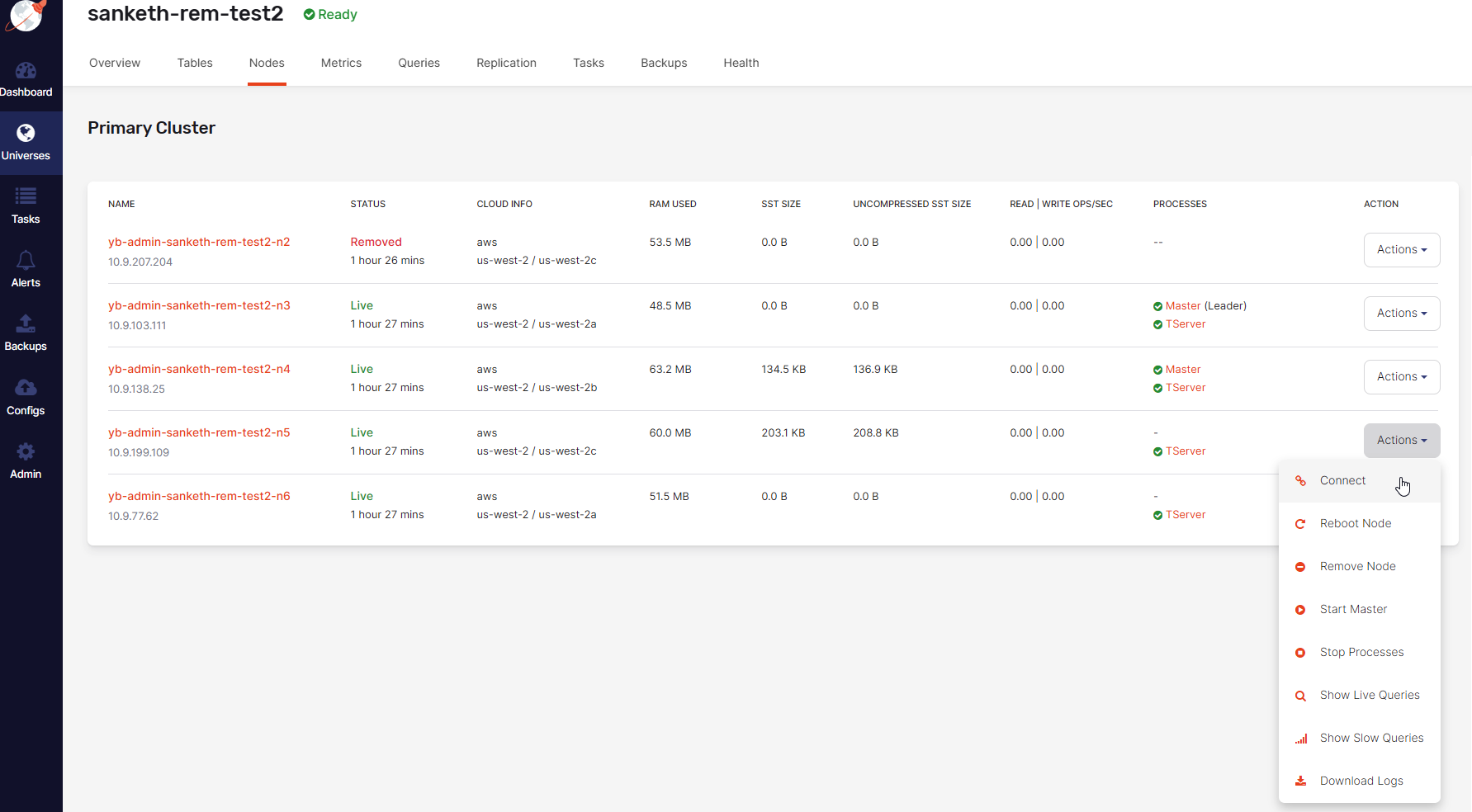 When you execute the start Master action, YugabyteDB Anywhere performs the following:

To release the IP address associated with the yb-15-aws-ys-n6 node, click its corresponding Actions > Release Instance. This changes the value in the Status column from Removed to Decommissioned.

The Release Instance action releases the node instances in a cloud or frees up on-premise nodes.

The action to release a node instance is available from the Removed internal state of the node.

You can recover a node whose Status column displays Decommissioned by following instructions provided in Recover a node.

You can perform the delete action via Actions corresponding to the node.

The action to delete a node is available from the following internal states of the node:

Taking this action completely eliminates the node, as follows: