You configure AWS by completing the fields of the page shown in the following illustration: 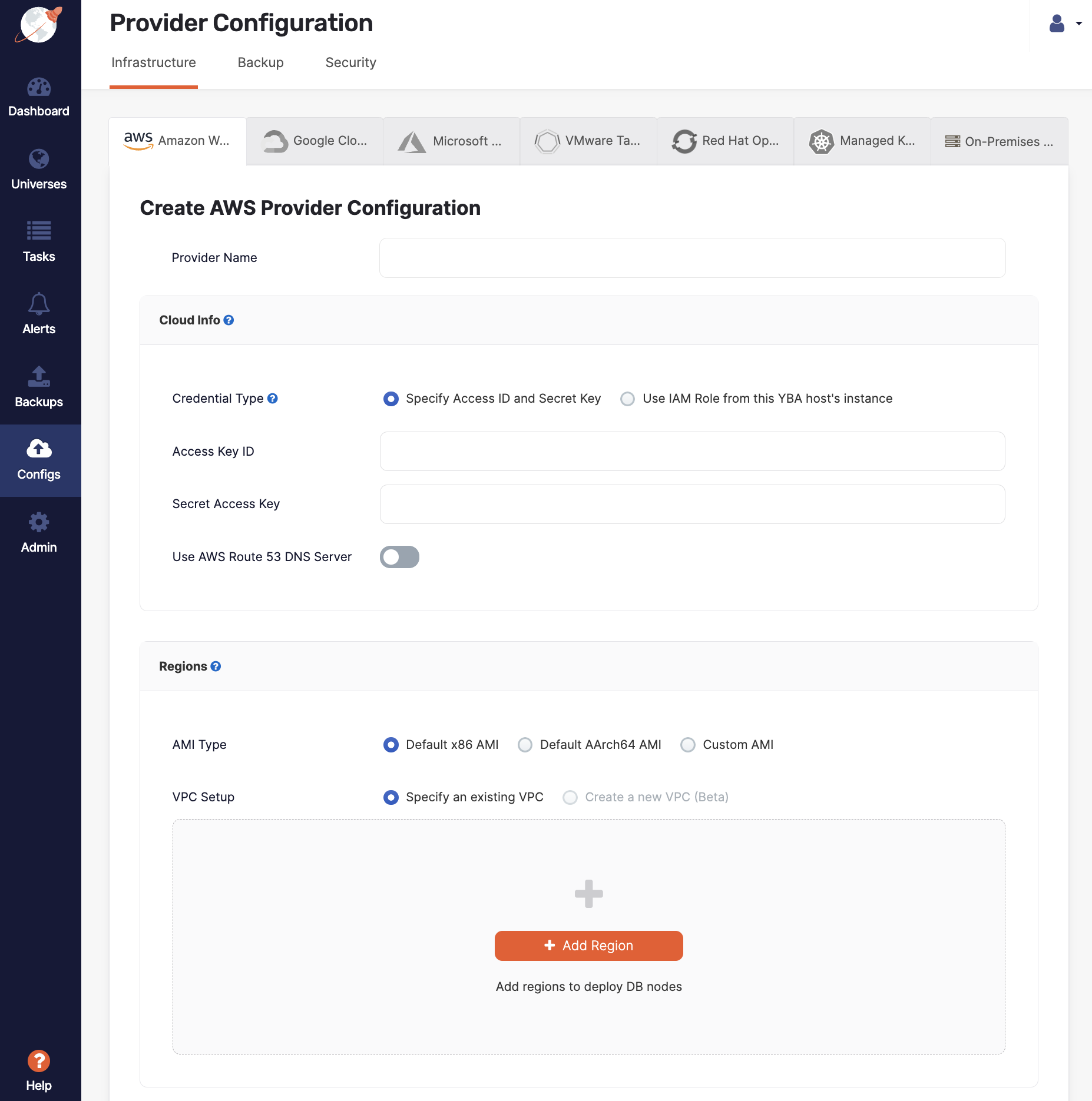 In order to deploy YugabyteDB nodes in your AWS account, YugabyteDB Anywhere requires access to a set of cloud credentials which can be provided in one of the following ways:

Integrating with hosted zones can make YugabyteDB universes easily discoverable. YugabyteDB Anywhere can integrate with Amazon Route53 to provide managed Canonical Name (CNAME) entries for your YugabyteDB universes, which will be updated as you change the set of nodes to include all relevant ones for each of your universes.

You can customize your network, including the virtual network, as follows:

You can customize the Network Time Protocol server, as follows:

If you use YugabyteDB Anywhere to configure, own, and manage a full cross-region deployment of Virtual Private Cloud (VPC), YugabyteDB Anywhere generates a YugabyteDB-specific VPC in each selected region, then interconnects them, as well as the VPC in which YugabyteDB Anywhere is deployed, using VPC peering. This mode also sets up all other relevant sub-components in all regions, such as subnets, security groups, and routing table entries.

You have an option to provide the following: 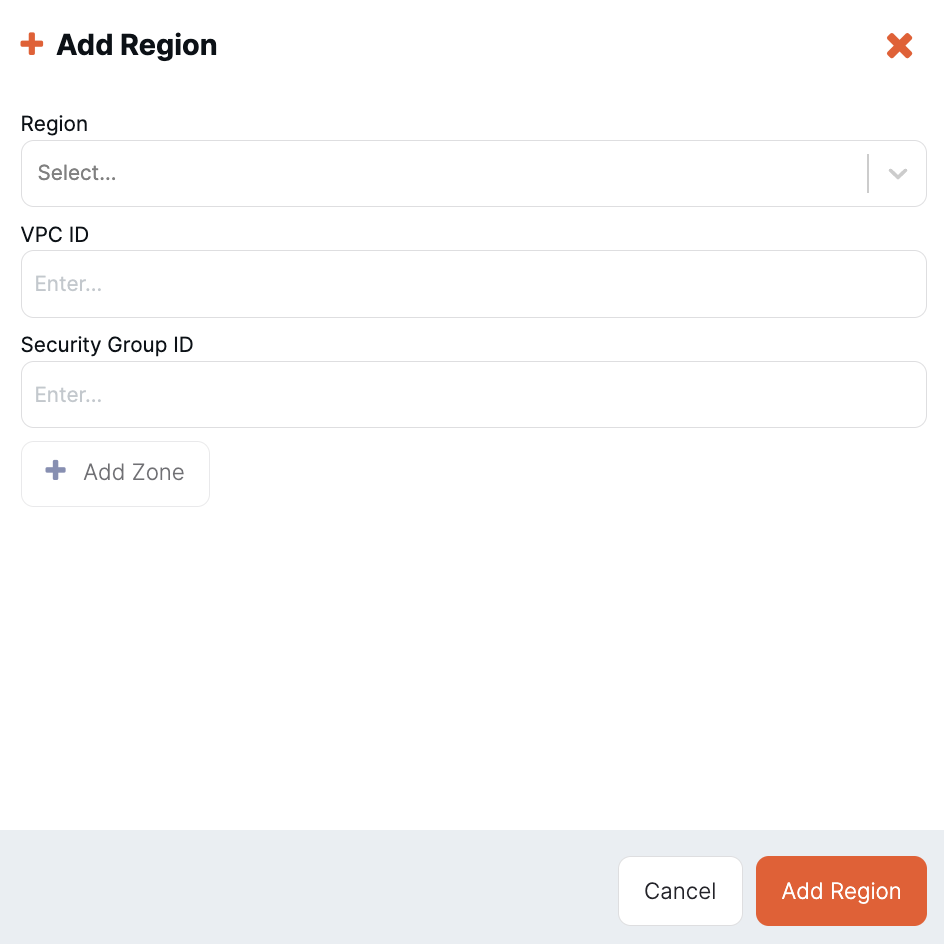 To use automatic provisioning to bring up a universe on AWS Graviton, you need to pass in the Arch AMI ID of AlmaLinux or Ubuntu. Note that this requires a YugabyteDB release for Linux ARM, which is available through one of the release pages (for example, the current preview release). YugabyteDB Anywhere enables you to import releases via S3 or HTTP, as described in Upgrade the YugabyteDB software.

You can use your own custom VPCs. This allows you the highest level of customization for your VPC setup. You can provide the following: 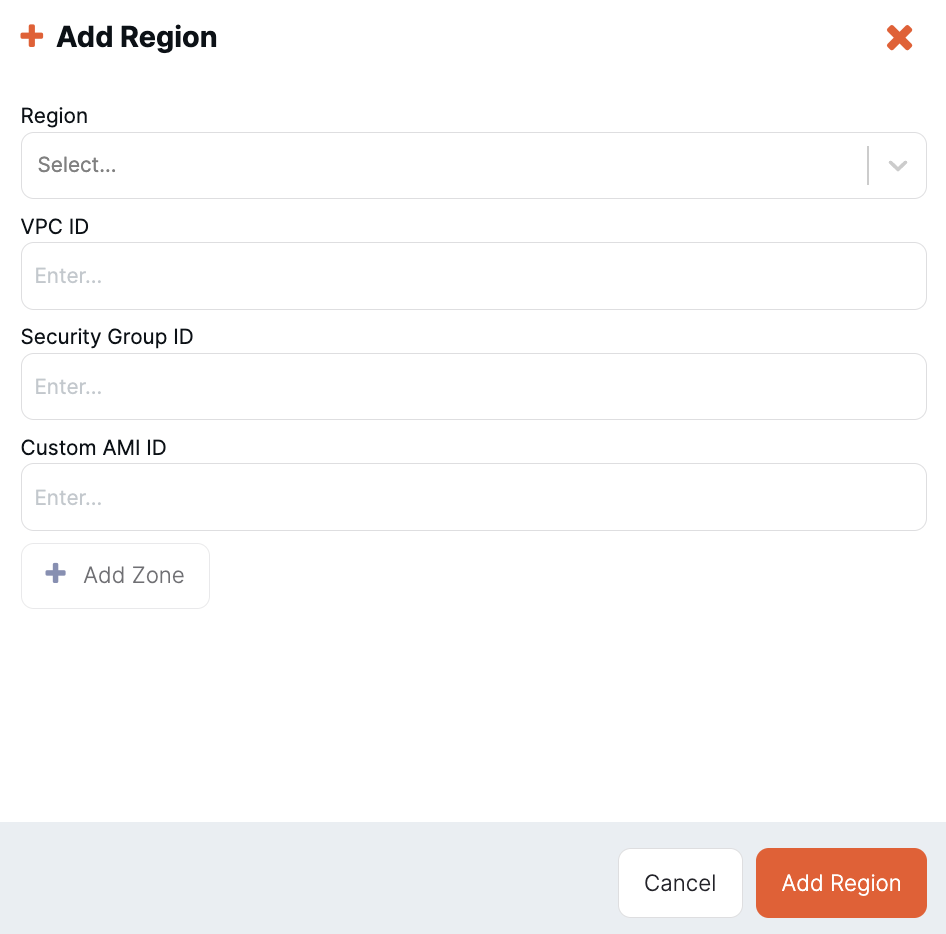 If you choose to provide your own VPC information, you will be responsible for having preconfigured networking connectivity. For single-region deployments, this might just be a matter of region or VPC local Security Groups. Across regions, however, the setup can get quite complex. It is recommended that you use the VPC peering feature of Amazon Virtual Private Cloud (Amazon VPC) to set up private IP connectivity between nodes located across regions, as follows:

If you create more than one AWS cloud provider with different CIDR block prefixes, your attempt to create a new VPC as part of your VPC setup will result in a silent failure.

If you did not provide your own custom AMI IDs, before you can proceed to creating a universe, verify that you can actually spin up EC2 instances with the default AMIs in YugabyteDB Anywhere.

If you are not already subscribed and have not accepted the Terms and Conditions, then you should see the following message:

If that is the case, click Accept Terms and wait for the page to switch to a successful state. After the operation completes, or if you previously subscribed and accepted the terms, you should see the following:

Now you are ready to create a YugabyteDB universe on AWS.