Tablet splitting is the resharding of data in the universe by presplitting tables before data is added or by changing the number of tablets at runtime. Currently, there are three mechanisms for tablet splitting in YugabyteDB universes.

When there is a need to scan a range of data, the data is stored in the natural sort order (also known as range-sharding). In such cases, it is often impossible to predict a good split boundary ahead of time. Consider the following example:

In this example, picking a split point ahead of time is difficult. The database cannot infer the range of values for age (typically in the 1 to 100 range) in the table. And the distribution of rows in the table (that is, how many user_id rows will be inserted for each value of age to make an evenly distributed data split) is impossible to predict.

In use cases with a low cardinality of the primary keys or the secondary index, hashing is not effective. For example, if a table where the primary key or index is the column gender, with only two values (Male or Female), hash sharding would not be effective. Using the entire cluster of machines to maximize serving throughput, however, is important.

Some tables start off small, with only a few shards. If these tables grow very large, the nodes are continuously added to the universe. It is possible that the number of nodes exceeds the number of tablets. To effectively rebalance the cluster, tablet splitting is required.

To presplit a table into a desired number of tablets, you need the start key and end key for each tablet. This makes presplitting slightly different for hash-sharded and range-sharded tables.

Because hash sharding works by applying a hash function on all or a subset of the primary key columns, the byte space of the hash sharded keys is known ahead of time. For example, if you use a 2-byte hash, the byte space would be [0x0000, 0xFFFF], as per the following illustration: 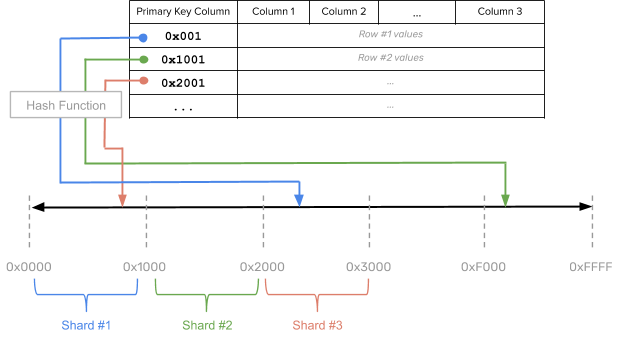 In the preceding diagram, the YSQL table is split into sixteen shards. This can be achieved by using the SPLIT INTO 16 TABLETS clause as a part of the CREATE TABLE statement, as follows:

For information on the relevant YSQL API, see the following:

For information on the relevant YCQL API, see the following:

In range-sharded YSQL tables, the start and end key for each tablet is not immediately known since this depends on the column type and the intended usage. For example, if the primary key is a percentage NUMBER column where the range of values is in the [0, 100] range, presplitting on the entire NUMBER space would not be effective.

For this reason, in order to presplit range-sharded tables, you must explicitly specify the split points, as per the following example:

For information on the relevant YSQL API, see CREATE TABLE ... SPLIT AT VALUES for use with range-sharded tables.

Suppose there is a table with pre-existing data spread across a certain number of tablets. It is possible to split some or all of the tablets in this table manually.

Note that misuse or overuse of manual tablet splitting (for example, splitting tablets which get less traffic) may result in creation of a large number of tablets of different sizes and traffic rates. This cannot be easily remedied, as tablet merging is not currently supported.

Verify the table has one tablet

In order to verify that the table t has only one tablet, list all the tablets for table t using the following yb-admin list_tablets command:

Note the tablet UUID for later use.

The tablet of this table can be manually split into two tablets by running the following yb-admin split_tablet command:

After the split, you expect to see two tablets for the table t, as per the following output:

The tablet leaders are now spread across two nodes in order to evenly balance the tablets for the table across the nodes of the cluster.

Automatic tablet splitting enables resharding of data in a cluster automatically while online, as well as transparently, when a specified size threshold has been reached.

For details on the architecture design, see Automatic resharding of data with tablet splitting.

To enable automatic tablet splitting, use the yb-master --enable_automatic_tablet_splitting flag and specify the associated flags to configure when tablets should split.

When automatic tablet splitting is enabled, newly-created tables have one shard per YB-TServer by default.

Once the shard count exceeds the high phase count (determined by tablet_split_high_phase_shard_count_per_node, 24 by default), YugabyteDB splits tablets larger than tablet_force_split_threshold_bytes (100 GB by default). This will continue until the tablet_split_limit_per_table tablets per table limit is reached (256 tablets by default; if set to 0, there will be no limit).

Once a split has been executed on a tablet, the two resulting tablets require a full compaction in order to remove unnecessary data from each. These post-split compactions can significantly increase CPU and disk usage and thus impact performance. To limit the impact, the number of simultaneous tablet splits allowed is conservative by default.

In the event that performance suffers due to automatic tablet splitting, the following flags can be used for tuning:

In the following example, a three-node cluster is created and uses a YCSB workload to demonstrate the use of automatic tablet splitting in a YSQL database:

For details on using YCSB with YugabyteDB, see Benchmark: YCSB.

The following known limitations are planned to be resolved in upcoming releases: