Use this benchmark to understand the performance, failure, and scaling characteristics of YugabyteDB with a massive dataset (multiple TB per node). In order to accomplish that, you will do the following:

Note that the load tester was run from a separate machine in the same availability zone (AZ).

Create a standard four-node cluster, with replication factor (RF) of 3. Pass the following option to the YugabyteDB processes.

The yb_num_shards_per_tserver was set to 20 (default value is 8). This is done because the i3.8xlarge nodes have four disks. In future, YugabyteDB will automatically pick better defaults for nodes with multiple disks.

The data was loaded at a steady rate over about 4 days using the CassandraKeyValue workload. To load the data, run the following command:

You should see a steady 85,000 inserts per second with write latencies of around 2.5 milliseconds. This is shown graphically below.

The graph below shows the steady growth in SSTables size at a node from Sep 4 to Sep 7 beyond which it stabilizes at 6.5 TB. 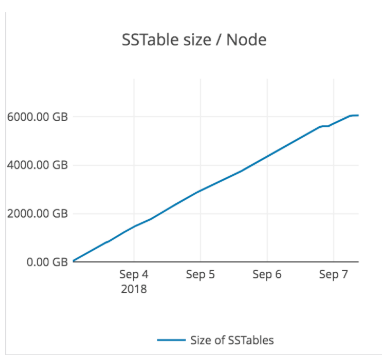 The uncompressed dataset size per node is 8 TB, while the compressed size is 6.5 TB. This is because the load generator generates random bytes, which are not very compressible.

The results you see should be similar to the observations shown below.