Yugabyte has developed the following smart drivers, available as open source software under the Apache 2.0 license.

YugabyteDB is a distributed, fault tolerant and highly available database with low latencies for reads and writes. Data in YugabyteDB is automatically sharded, replicated, and balanced across multiple nodes that can potentially be in different availability zones and regions. For better performance and fault tolerance, you can also balance application traffic (that is, connections to the database) across the nodes in the cluster to avoid excessive load (CPU and memory) on any single node (that is, hot nodes).

You can load balance application connections to the database in the following ways:

Because YugabyteDB is feature compatible with PostgreSQL, applications can use many of the widely available PostgreSQL client drivers to connect to a YugabyteDB cluster. However, these drivers are designed to be used with a monolithic database with a single network address. When they connect to a distributed database, they don't understand that the database consists of multiple nodes that they can connect to. One way to get around this limitation is to put the nodes behind one or more external load balancers.

However this approach results in complex configurations and increases management overhead. For example, the database cluster endpoints abstract role changes (primary elections) and topology changes (addition and removal of instances) occurring in the database cluster, and DNS updates are not instantaneous. In addition, they can lead to a slightly longer delay between the time a database event occurs and the time it's noticed and handled by the application. 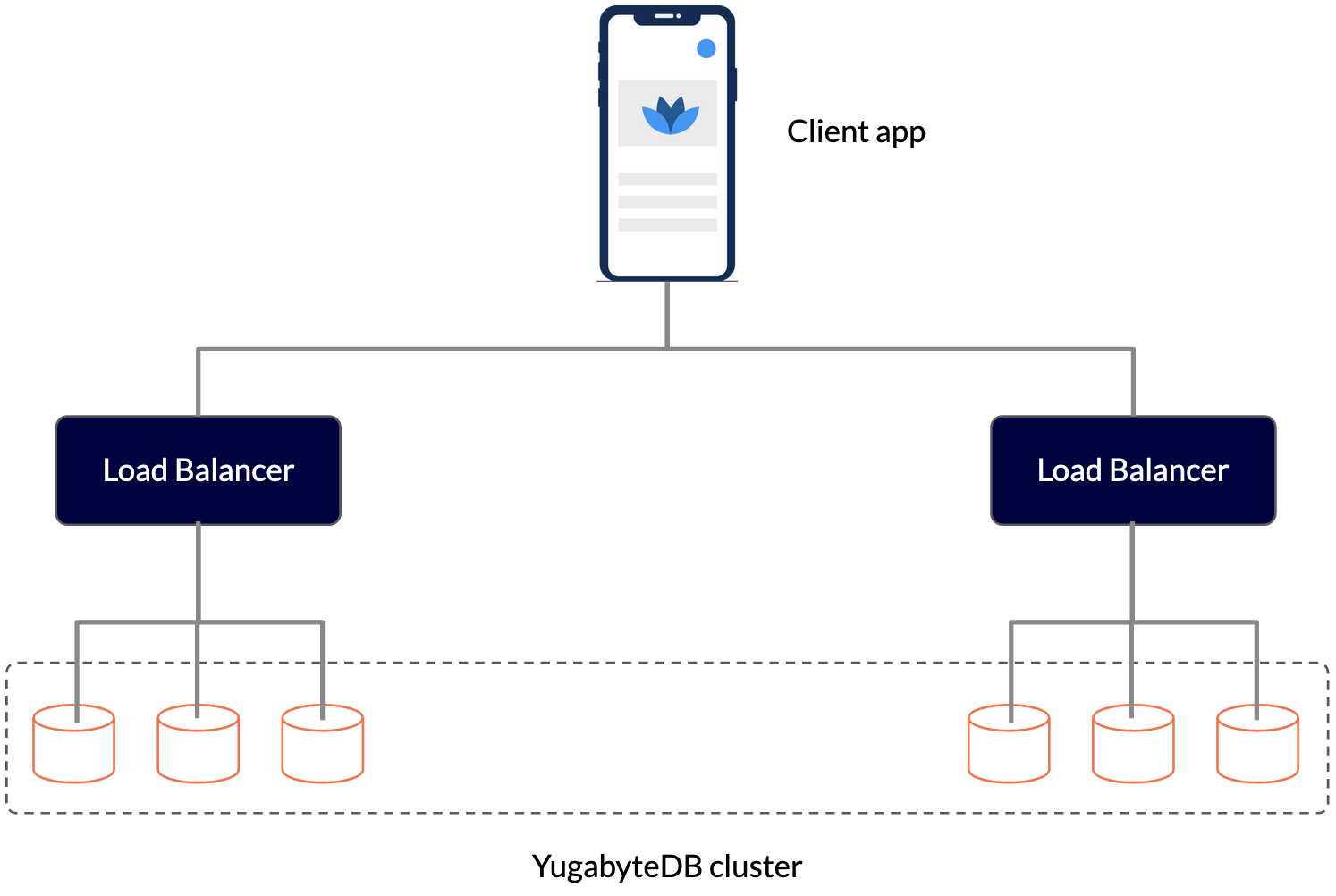 Smart client drivers allow applications to get better performance and fault tolerance by connecting to any node in a distributed SQL database cluster without the need for an external load balancer.

Smart drivers are optimized for use with a distributed SQL database, and are both cluster-aware and topology-aware; the driver keeps track of the members of the cluster as well as their locations. As nodes are added or removed from clusters, the driver updates its membership and topology information. The drivers read the database cluster topology from the metadata table, and route new connections to individual instance endpoints without relying on high-level cluster endpoints. The smart drivers are also capable of load balancing read-only connections across the available YB-TServers.

Smart drivers offer the following advantages over a PostgreSQL driver:

In both cases, the driver attempts to connect to the least loaded server from the available group of servers. For topology-aware load balancing, this group is determined by geo-locations specified using the topology keys connection parameter.

With cluster-aware (also referred to as uniform) connection load balancing, connections are distributed uniformly across all the YB-TServers in the cluster, irrespective of their placement.

For example, using the Go smart driver, you would turn on load balancing as follows:

With this parameter specified in the URL, the driver fetches and maintains a list of nodes from the given endpoint (localhost in preceding example) available in the YugabyteDB cluster and distributes the connections equally across them.

A connection works as follows:

After the connection is established with a node, if that node fails, then the request is not retried.

The application must use the same connection URL to create every connection it needs, so that the distribution happens equally.

With topology-aware connection load balancing, you can target nodes in specified geo-locations. The driver then distributes connections uniformly among the nodes in the specified locations. If no servers are available, the request may return with a failure.

For example, using the Go driver, you would set the parameters as follows:

You still need to specify load balance as true to enable the topology-aware connection load balancing.

For regular connections, you need to connect to the region of choice, and application connections are then uniformly distributed across the region without the need for any special coding.

If you are using a smart driver with topology awareness, you can connect to any region and the load balancer acts as a discovery endpoint, allowing the application to use connections to nodes in all regions.

Applications using smart drivers must be deployed in a VPC that has been peered with the cluster VPC. For information on VPC networking in YugabyteDB Managed, refer to VPC network.