For details about configuring a 2DC deployment, see Replicate between two data centers.

In the following sections, the terms "cluster" and "universe" will be used interchangeably, assuming that each YugabyteDB universe is deployed in a single data center.

Two data center (2DC) deployments with YugabyteDB include support for the following features:

Unidirectional replication is performed from a source cluster (aka the master cluster) to one or more sink clusters (aka follower clusters). The sink clusters, typically located in data centers or regions that are different from the source cluster, are passive because they do not accept writes from higher layer services. These deployments are typically used to serve low latency reads from the follower clusters and for disaster recovery. 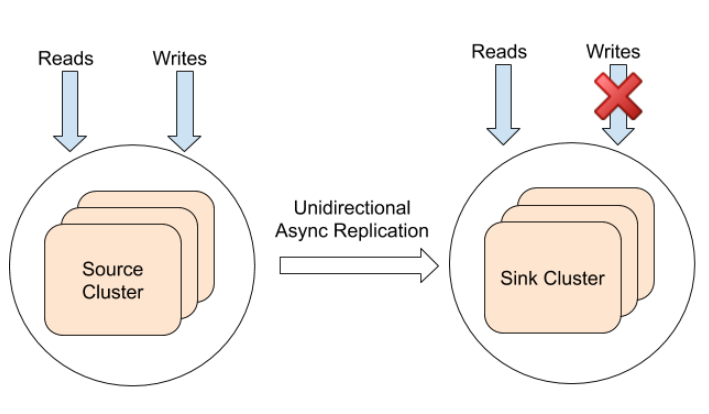 Data can be replicated bidirectionally between two clusters. In this scenario, both clusters can perform reads and writes. Writes to either cluster is asynchronously replicated to the other cluster with a timestamp for the update. If the same key is updated in both clusters in a similar time window, the write with the latest timestamp become the latest write. In this scenario, both clusters are active and the deployment mode is called multi-master deployments or active-active deployments.

The multi-master deployment is built internally using two master-follower unidirectional replication streams as building blocks. Special care is taken to ensure that the timestamps are assigned to ensure last-writer-wins semantics and that data arriving from the replication stream is not re-replicated. Because master-follower is the core building block, the rest of the discussion on this page focuses on that.

The multi-master architecture is shown here: 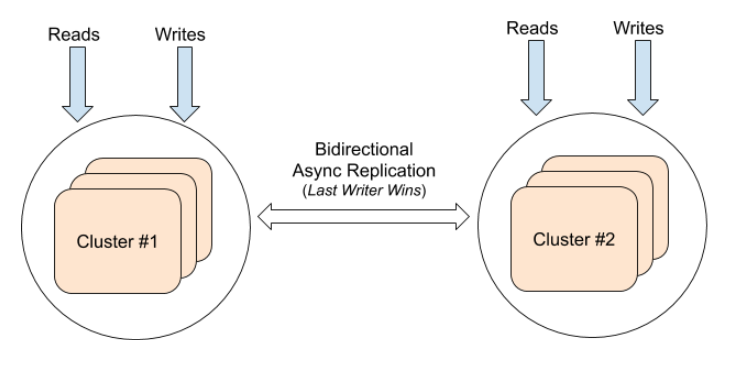 Life cycle of a replication

Details about each of these life cycle phases follows.

1. Initialize the producer and the consumer

In order to set up a 2DC asynchronous replication, the user runs a command similar to the one here:

This instructs the sink cluster to perform the following two actions:

These actions are shown here: 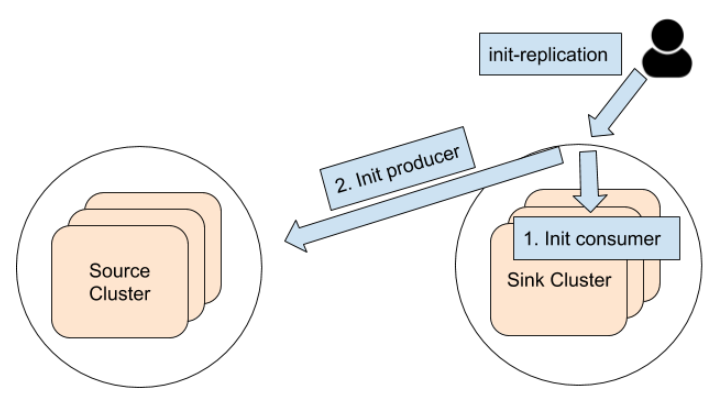 Note that the sink clusters can fall behind the source clusters due to various failure scenarios (for example, node outages or extended network partitions). Upon healing of the failure conditions, continuing replication may not always be safe. In such cases, the user needs to bootstrap the sink cluster to a point from which replication can safely resume. Some of the cases that arise are shown diagrammatically below:

2. Set up a distributed CDC

The second step is to start the change data capture processes on the source cluster so that it can begin generating a list of changes. Since this feature builds on top of Change Data Capture (CDC), the change stream has the following guarantees:

As a part of this step, the following substeps happen:

The sink cluster maintains the state of replication in a separate CDC state table (system.cdc_state). The following information is tracked for each tablet in the source cluster that needs to be replicated:

The sink replication consumer continuously performs a GetCDCRecords() RPC call to fetch updates (which returns a GetCDCRecordsResponsePB). The source cluster sends a response that includes a list of update messages that need to be replicated, if any. Optionally, it also includes a list of IP addresses of new nodes in the source cluster in case tablets have moved. An example of the response message is shown here:

Each update message has a corresponding document key (denoted by the document_key_1 field in the figure above), which the sink replication consumer uses to locate the owning tablet leader on the sink cluster. The update message is routed to that tablet leader, which handles the update request. For details on how this update is handled, see transactional guarantees below.

In a Kubernetes deployment, the GetCDCRecords() RPC request can be routed to the appropriate node through an external load balancer.

The sink cluster nodes will periodically write a checkpoint consisting of the last successfully applied operation ID along with the source tablet information into its CDC state table (system.cdc_state). This allows the replication to continue from this point onwards.

The following sections outline how these transactional guarantees are achieved by looking at how a tablet leader handles a single ReplicateMsg, which has changes for a document key that it owns.

In the case of single-row transactions, the TransactionMetadata field would not have a txn uuid set since there are no provisional writes. Note that in this case, the only valid value for OperationType is write.

On receiving a new single-row write ReplicateMsg for the key document_key, the tablet leader that owns the key processes the ReplicateMsg according to the following rules:

Once the ReplicateMsg is processed by the tablet leader, the sink replication consumer marks the record as consumed.

All replicated records will be applied at the same hybrid timestamp at which they occurred on the producer universe.

In the case of single-row transactions, the TransactionMetadata field will be set. Note that in this case, the OperationType can be WRITE or CREATE/UPDATE TXN.

Upon receiving a ReplicateMsg that is a part of a multi-row transaction, the sink replication consumer handles it as follows:

Sends the record to tablet leader of the key, which ensures there is no conflict before writing a provisional write record.

The following cases are possible:

This combination of the WAITING_TO_COMMIT status and the tablets_received_applying_record field will be used to ensure that transaction records are applied atomically on the replicated universe.

If there is a write conflict (for example, the same row is updated on both universes), then we’ll follow the last-writer-wins semantics and the write with the latest timestamp will eventually persist on both data centers.

Support setting up replication on new tables that are added after 2DC is setup. In this situation, users will need to run yb-admin command and list the new table to consume from.

Setting up replication on empty tables

Currently: it is the responsibility of the end user to ensure that a sink cluster has sufficiently recent updates so that replication can safely resume.

Future: bootstrapping the sink cluster can be automated.

Currently: DDL changes are not automatically replicated. Applying create table and alter table commands to the sync clusters is the responsibility of the user.

Safety of DDL and DML in active-active

Currently: Certain potentially unsafe combinations of DDL/DML are allowed. For example, in having a unique key constraint on a column in an active-active last-writer-wins mode is unsafe since a violation could easily be introduced by inserting different values on the two clusters — each of these operations is legal in itself. The ensuing replication can, however, violate the unique key constraint. This will cause the two clusters to permanently diverge and the replication to fail.

Future: Detect such unsafe combinations and warn the user. Such combinations should possibly be disallowed by default.

Since 2DC replication is done asynchronously and by replicating the WAL (thus bypassing the query layer), application design needs to follow these patterns:

Avoid UNIQUE indexes and constraints (only for active-active mode)

Since replication is done at the WAL level, we don’t have a way to check for unique constraints. It’s possible to have two conflicting writes on separate universes which will violate the unique constraint and will cause the main table to contain both rows but the index to contain just one row, resulting in an inconsistent state.

Since we bypass the query layer for replicated records, DB triggers will not be fired for those and can result in unexpected behavior.

Avoid serial columns in primary key (only for active-active mode)

Since both universes will generate the same sequence numbers, this can result in conflicting rows. It’s better to use UUIDs instead.