To create a table, the YB-Master leader performs a number of steps.

The YB-Master leader validates the table schema and creates the desired number of tablets for the table. The tablets are not yet assigned to YB-TServers.

At this point, the asynchronous table creation API returns a success, since the operation can proceed even if the current YB-Master leader fails.

The YB-Master leader assigns each of the tablets to as many YB-TServers as the replication factor of the table. The tablet peer placement is done in such a manner as to ensure that the desired fault tolerance is achieved and the YB-TServers are evenly balanced with respect to the number of tablets they are assigned. In some deployment scenarios, the assignment of the tablets to YB-TServers may need to satisfy additional constraints such as distributing the individual replicas of each tablet across multiple cloud providers, regions, and availability zones.

The YB-Master leader monitors the entire tablet assignment operation and reports on its progress and completion to the user-issued API calls.

Suppose a table with four nodes is created in a YugabyteDB universe. In addition, suppose that the table has sixteen tablets and a replication factor of 3. The YB-Master leader validates the schema, creates sixteen tablets (forty-eight tablet peers in total, due to the replication factor of 3) and replicates the data needed for table creation across a majority of YB-Masters using Raft. The following diagram depicts the start of the table creation process: 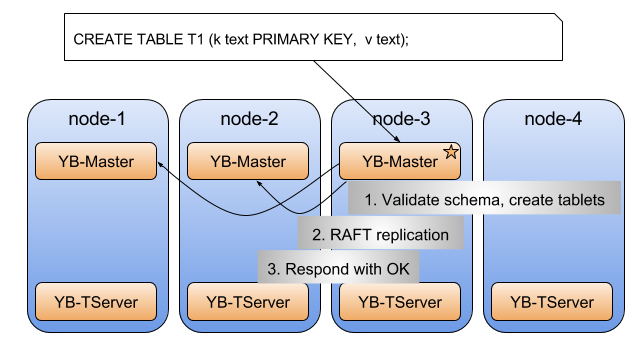 The following diagram depicts the process of the newly-created tablets being assigned to a number of YB-TServers: 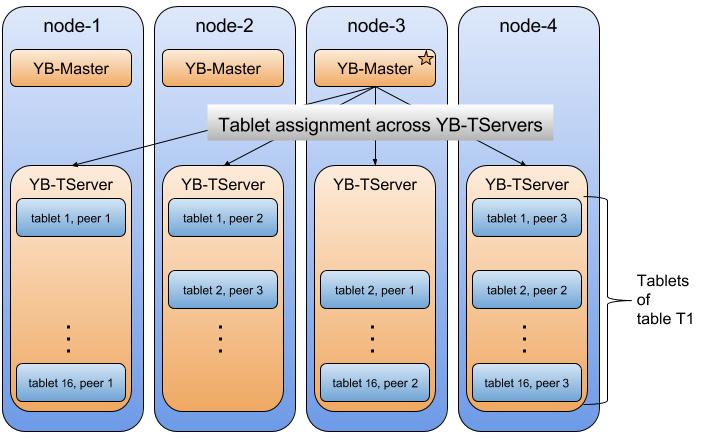 The tablet-peers hosted on different YB-TServers form a Raft group and elect a leader. For all reads and writes of keys belonging to this tablet, the tablet-peer leader and the Raft group are respectively responsible. Once assigned, the tablets are owned by the YB-TServers until the ownership is changed by the YB-Master either due to an extended failure or a future load-balancing event, as demonstrated by the following diagram: 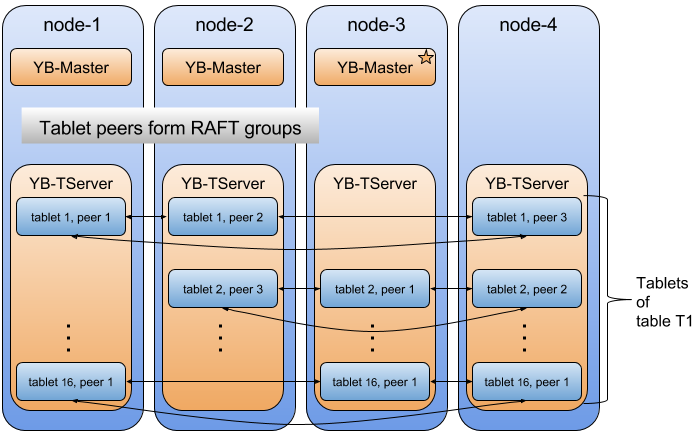 If one of the YB-TServers hosting the tablet leader fails, the tablet Raft group immediately re-elects a leader for purposes of handling I/O. Therefore, the YB-Master is not in the critical I/O path. If a YB-TServer remains in a failed state for an extended period of time, the YB-Master finds a set of suitable candidates to which to rereplicate its data. It does so in a throttled and graceful manner.